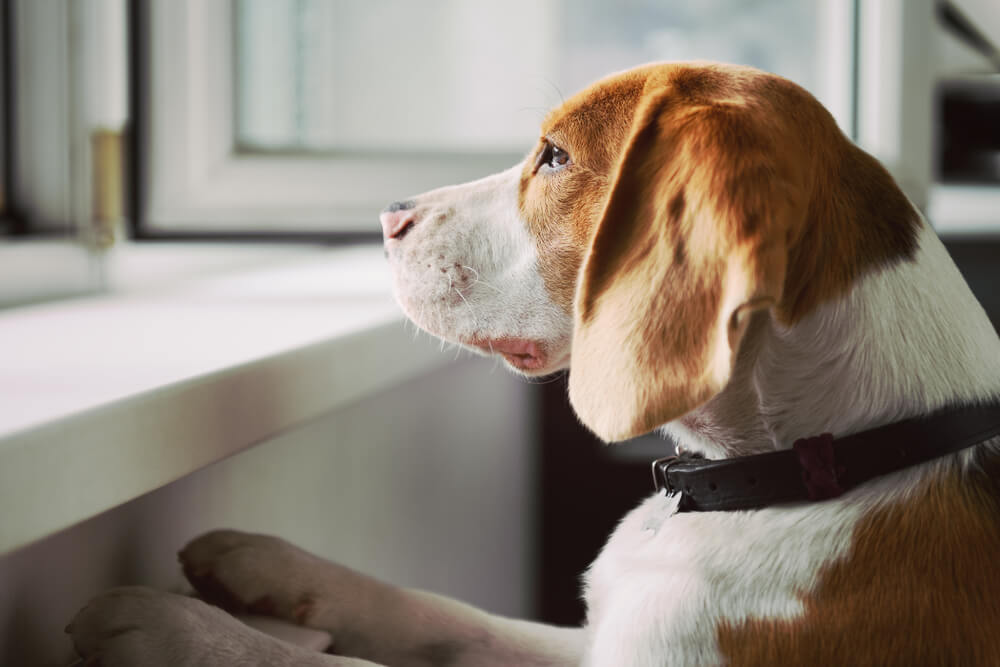 One of the most common complaints of a pet parent is that their dogs are disruptive or destructive when left alone.

Their dogs might urinate, defecate, bark, howl, chew, dig or try to escape although these problems often indicate that a dog needs to be taught polite house manners, they can also be symptoms of distress.

When a dog’s problems are accompanied by other distress behaviors, such as drooling and showing anxiety when his pet parent prepares to leave the house, they don’t evidence that the dog isn’t house trained or doesn’t know which toys are his to chew.

Instead, they are indications that the dog has separation anxiety.

Separation anxiety is triggered when dogs become upset because of separation from their guardians, the people they’re attached to.

Escape attempts by dogs with separation anxiety are often extreme and can result in self-injury and household destruction, especially around exit points like windows and doors.

Some dogs suffering from separation anxiety become agitated when their guardians prepare to leave.

Some try to prevent their guardians from leaving.

Usually, right after a guardian leaves a dog with separation anxiety, the dog will begin barking and displaying other distress behaviors within a short time after being left alone often within minutes.

When the guardian returns home, the dog acts as though it’s been years since he’s seen his mom or dad.

When treating a dog with separation anxiety, the goal is to resolve the dog’s underlying anxiety by teaching him to enjoy, or at least tolerate, being left alone.

This is accomplished by setting things up so that the dog experiences the situation that provokes his anxiety, namely being alone, without experiencing fear or anxiety. 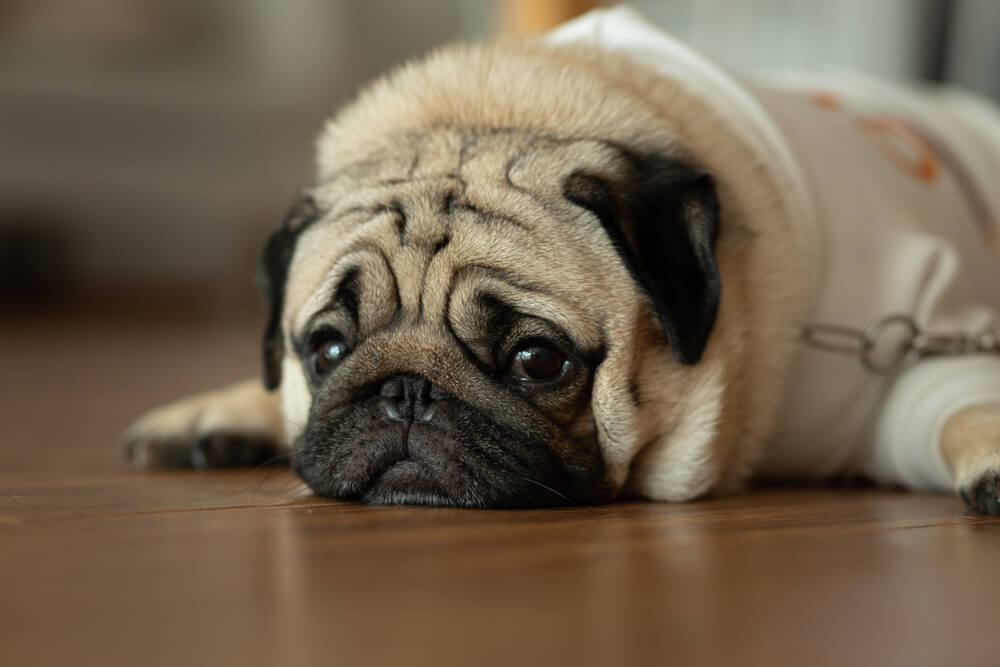 What Is Puppy Separation Anxiety?

Whether in a puppy or an adult dog, separation anxiety is when your dog exhibits extreme stress from the time you leave him alone until you return.

It also happens when a dog that’s hyper-attached to its owner gets super-stressed when left alone.

It’s more than a little whining when you leave or a bit of mischief while you’re out.

It’s a serious condition and one of the main reasons owners get frustrated with their dogs and give them up. But there are plenty of things you can do to help. 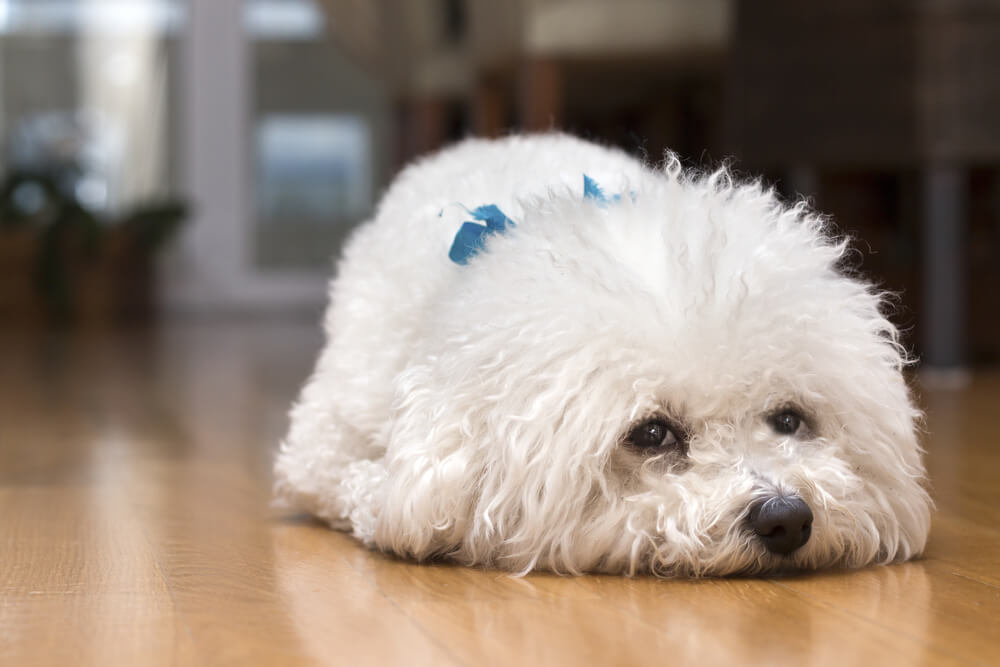 How To Deal With Puppy Separation Anxiety?

It’s good for your puppy to be comfortable when home alone.

You can help him learn this by taking a little time and following these simple steps.

Start as soon as your puppy comes home, if possible.

Develop a schedule for your puppy, and make sure your family sticks to it.

Always give your puppy an opportunity to go potty prior to crating him.

When done properly, the use of a crate is a great way to help your puppy remain calm and out of trouble!

Crate him for short periods while you are present.

For example, when you are watching television, put your puppy in his crate and put the crate next to the sofa.

Start leaving your puppy alone in his crate. ‘

Start with just a few minutes at a time.

Limit the attention he gets shortly before leaving, so it isn’t such a shock when your family does leave.

When you let your puppy out of his crate, remain calm and keep the greetings to a minimum.

You don’t want to make him excited.

Most puppies don’t need to be on a crate throughout their lives, but don’t rush freedom.

Typically, puppies aren’t ready to be given unsupervised freedom in your home until they are approximately a year and a half or older.

Try to make sure someone in your family is home as much as possible.

Consider hiring a puppy-walker or neighbor to give your puppy a midday break while everyone is at work or school.

Keeping your schedule similar on weekends can help make things easier for your puppy. 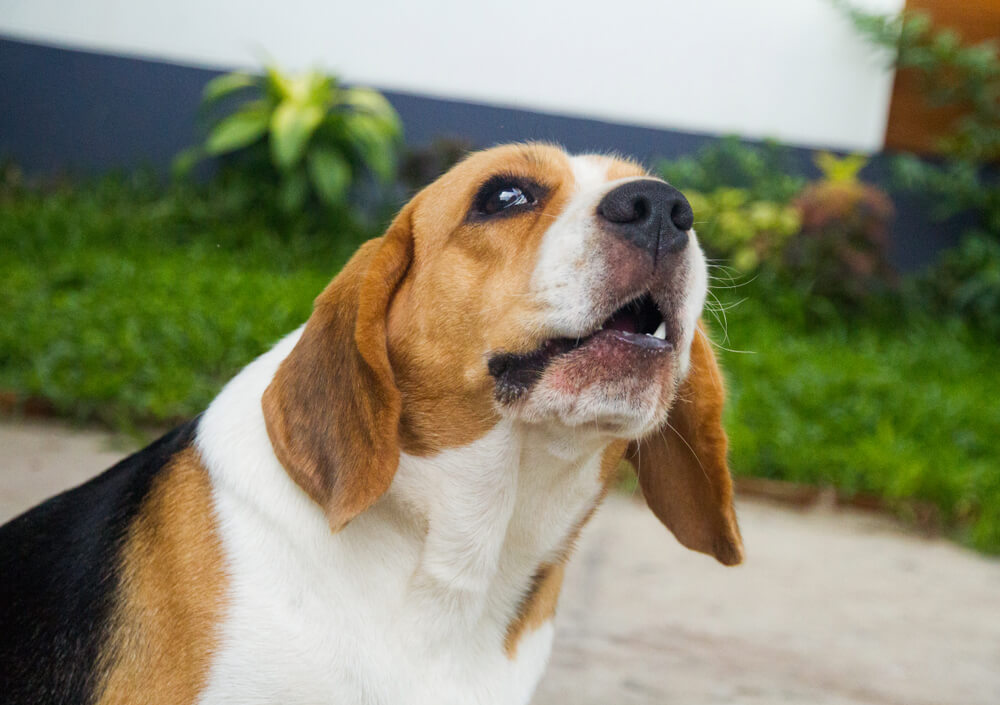 What Are The Signs Of Puppy Separation Anxiety?

As you can imagine, the signs and symptoms are often not hard to spot.

Dogs can exhibit stress in many ways, so there is no one defining sign of Separation Anxiety.

Instead, there are a variety of symptoms.

One or two of them, especially if they only happen occasionally, may not be a sign of puppy separation anxiety.

But if your puppy shows multiple symptoms on a regular basis, he may be suffering from Separation Anxiety.

Here are some behaviors your dog may exhibit:

They may try to escape the area, and some dogs will react to anxiety with aggressive behavior, which could make them a danger to themselves and others.

Some of these signs and symptoms are the same for other conditions, so it is recommended to see your veterinarian rule out other 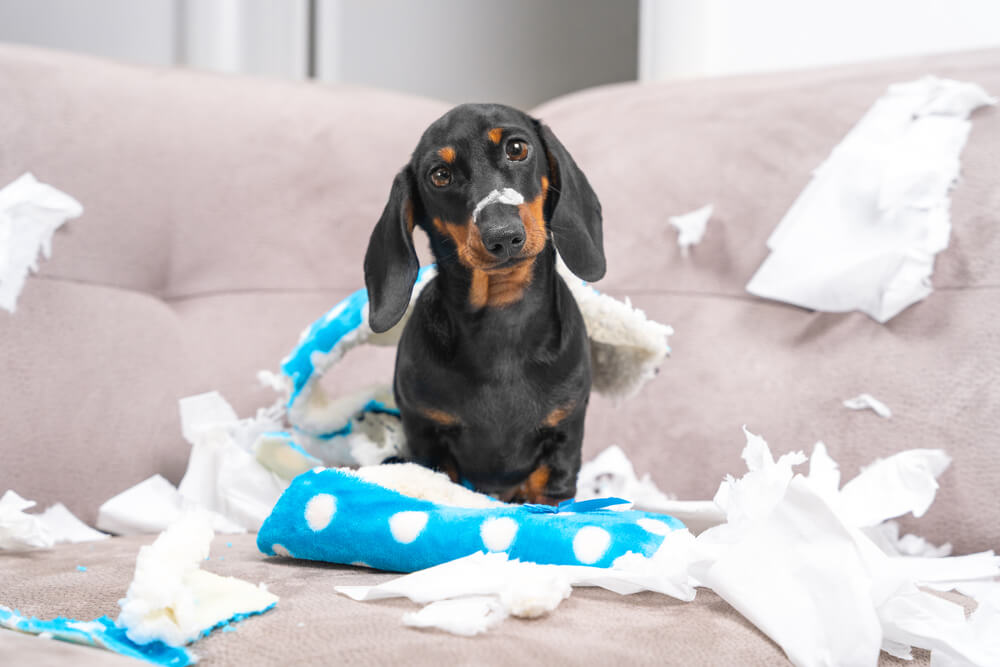 We make a big fuss when we leave or come home, and in doing so we reward the dog’s concern with our absence, provoking in him even more stress every time we leave.

First, understand what causes your dog to act this way:

We like our dogs to be with us and when they are puppies, we take them everywhere for socialization.

Then, we have to leave them alone, but they reach an age when they not only want, but also feel the need to be with us we are their source of confidence, their security, and their pack.

A change in their routines can create the symptoms of dog separation anxiety, but destruction and stress can also be created by boredom and lack of exercise.

A good start to correcting these problems: “exercise, discipline, and only then, affection.”

You need to establish a balance between patience, obedience, and confidence in your dog.

Aim to develop a behavior in our dog that reflects the harmonious partnership you both share.

He should have enough confidence in himself and in your leadership.

This way, they can be confident in situations, such as being left alone, because he knows that you will always provide the leadership and guidance required.

Trusts and knows that you will come home.

How To Treat Separation Anxiety

It’s exhausting to come home to destruction and upsetting to see your puppy in such distress.

It’s even more devastating for your dog.

Some of the treatments are the same as preventative measures and may already be part of your puppy’s routine but consider all of them as you tackle Separation Anxiety.

It bears repeating that a crate is your dog’s friend and your ally it’s an important training tool and the solution for many puppy challenges.

It isn’t cruel or unhealthy if used appropriately. Instead, it can provide your pup with a safe, quiet place to relax.

An important part of raising a mentally and physically healthy new puppy is teaching him to be comfortable in the world and to form positive associations with new experiences.

That’s equally true for time away from you. Teach your puppy that separation has its rewards.

Exercise can’t cure Separation Anxiety, but it certainly can help treat and prevent it.

First, make sure your puppy gets plenty of age-appropriate physical exercise.

This is especially true for large, high-energy dogs with a lot of it to burn off.

Instead, develop independence by teaching your puppy to be on his own in another room even when you’re at home.

Teaching a solid stay is another way to battle excessive attachment.

DO make leaving and arriving uneventful.

By making leaving a big production lots of hugs and goodbyes or asking if he’ll miss you.

You may increase your puppy’s anxiety level.

You may want to consider giving him a treat or an appropriate toy so that he associates the crate with something positive.

Leaving the television or radio on may help too.

DON’T get overly excited when you return.

Just let your puppy out of his crate promptly and take him outside as he may need to relieve himself.

As he gets older and has better control of his bladder, waits until your puppy is calm and quiet, then casually go greet him and praise him for being calm and quiet.

Puppies should never be punished for any anxiety-based behavior because punishment makes it worse.

If your puppy exhibits destructive separation behaviors, you can take steps to reduce the problem.