10 Things About Dachshunds Every Owner Should Know 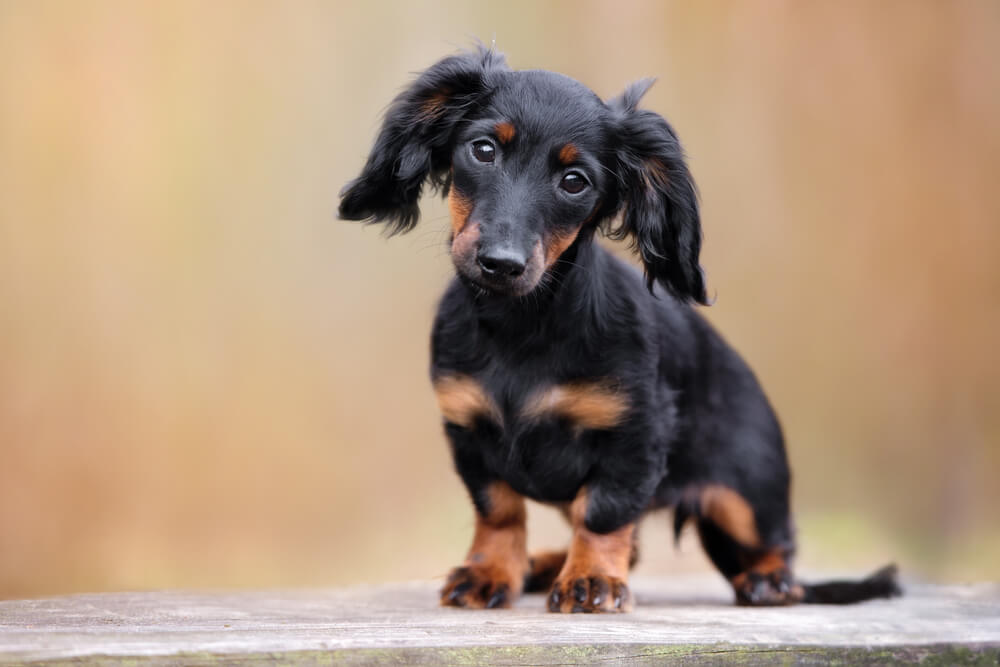 Introduction to 10 Things About Dachshunds Every Owner Should Know

The Dachshund is a sturdy, compact dog breed whose origins are somewhat mysterious.

A popular theory says that the Dachshund is descended from German hunters’ dogs, which were then bred with a herding dog to produce a canine that hunts burrowing rodents.

This may explain why Dachshunds have the instincts to hunt, which can be problematic if you are an owner who wants an indoor dog.

(Dachshunds can and do dig their way under fences, so an indoor Dachshund will still need to go out for short walks).

They are considered a breed of dog, most often considered to be a short-legged variety of the sausage dog, but occasionally classified as a type of terrier.

Originally bred to chase and kill badgers and other burrow-dwelling animals, Dachshunds are muscular little dogs with short legs and long bodies.

As hunting dogs, Dachshunds originally developed to be fearless and aggressive to the point of being ferocious, but this changed when they were domesticated and their instincts became more dog-like in nature.

It’s no mystery why so many dog lovers adore the Dachshund breed.

Their big personalities, penchant for playing, and disposition toward caring for their human companions make them a perfect fit for many households.

That’s why buying a Dachshund should be a careful consideration.

While they’re all lovable, not all Dachshunds are the same.

It is amazing quite how many people take on the responsibility of caring for a dog without much knowledge of the breed.

However, understanding breed-specific information is essential if you are to provide the best possible care for your new pooch.

If you are considering adopting a dachshund, or if you already have one of these gorgeous hounds as part of your family, there are bound to be questions that you have and things that you don’t yet know.

Here is our guide to the things that every dachshund owner should know. 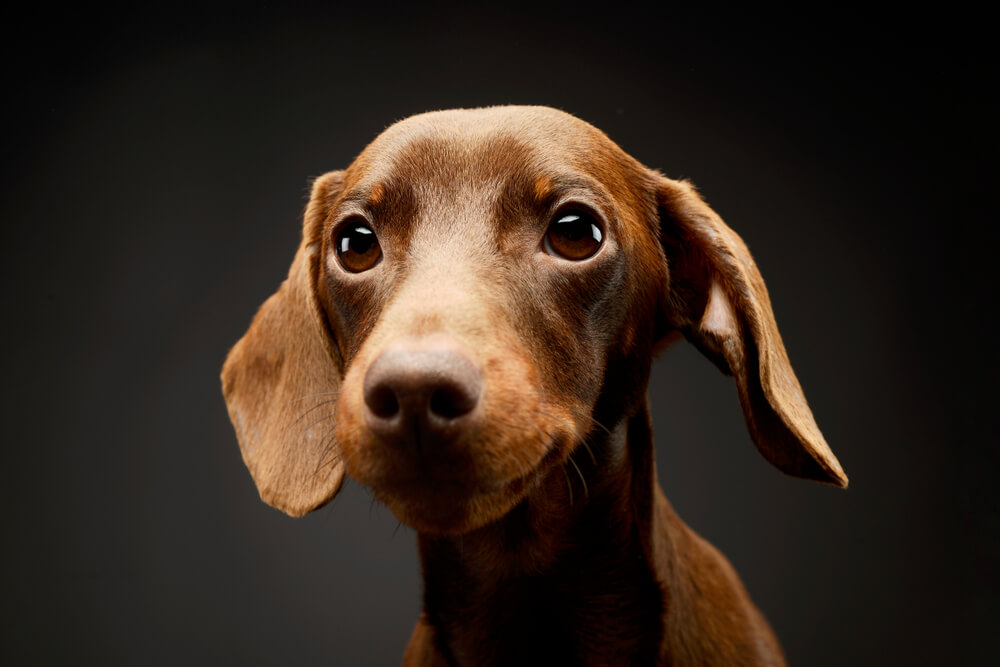 Dachshunds were bred to hunt mean animals that live in burrows. They were bred to not back down or give up in the face of a threat. A Dachshund will keep at any problem in front of them until they solve it. They were also bred to think for themselves because they are down in the burrow without a human telling them what to do. Unfortunately, that means they may use their superpowers to figure out, or get into, things you don’t want them to. When I travel with my current Dachshunds, Gretel and Summit, in the car, I use a seat belt tether, or a dog car seat with a strap to hold them in, to keep them from wandering and distracting me. I also place my groceries, dog food, etc. that I buy in a tightly-latched cargo box so they can’t eat it while I’m not in the vehicle (they probably COULD still get into it if given enough time, which is why I also use a seat belt tether). 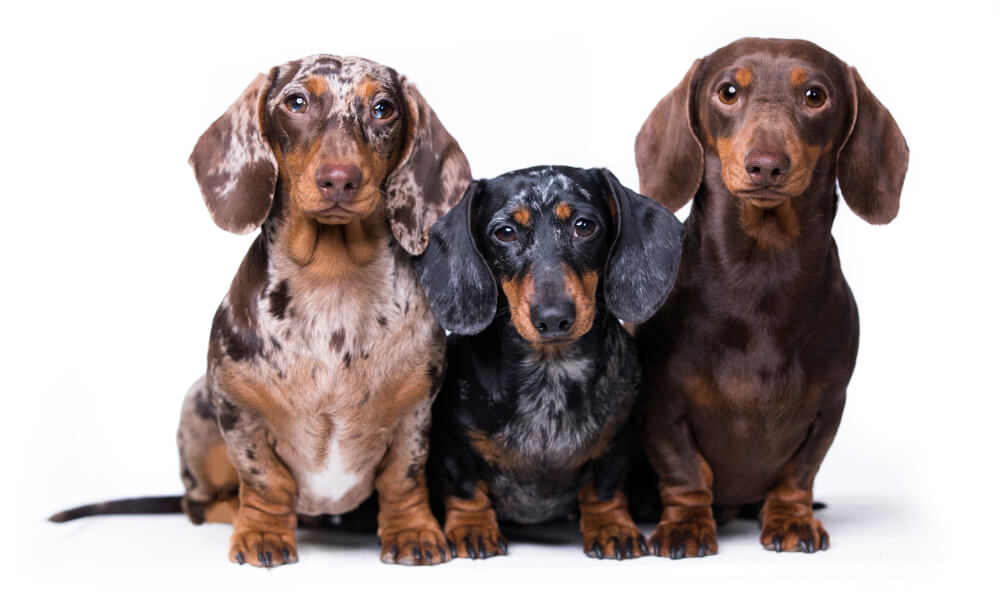 Dachshunds Live For A Long Time

The average Dachshund lifespan is 14-16 years old. Most live at least until they are 11 or 12 and I have seen many, many Dachshunds live to be between the ages of 17 – 20. If you own a Dachshund, be prepared to be in it for the long haul. I help keep my Dachshunds Summit and Gretel healthy by giving them these supplements and feeding them these foods. 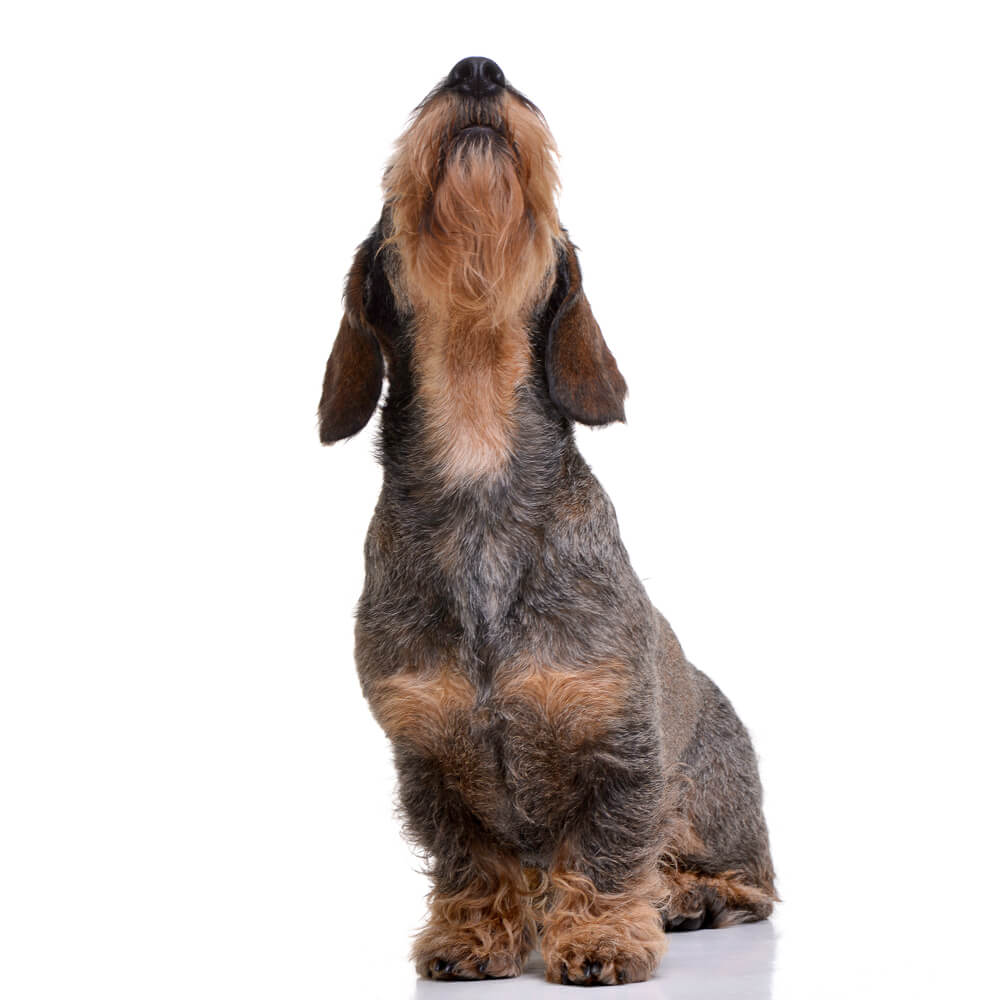 Some Dachshund bark more than others but they are generally dogs that bark at the mailman and blowing leaves with equal vigor.

Also, the pizza delivery guy may think you have a Rottweiler behind that door.

You’ll have to work to train a Dachshund to stop barking and keep it under control in most cases.

This is largely hardwired since they were bred to trap prey underground and then bark until the hunters could find them and dig them out. 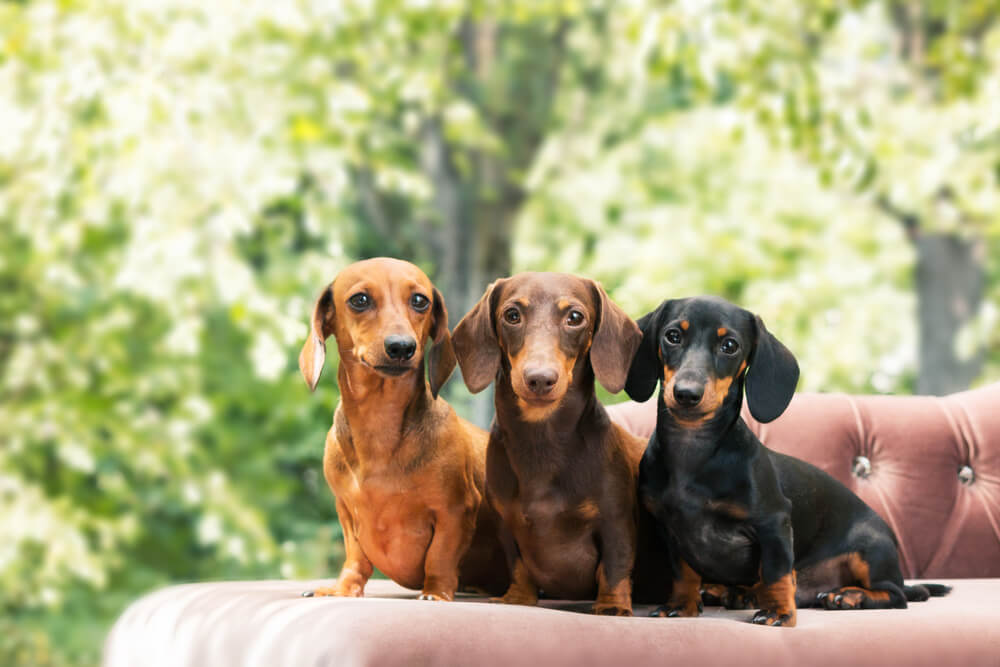 Dachshunds Can Be Picky About Weather

Many Dachshunds have what I like to call Wet Belly Syndrome. Your Dachshund may refuse to go outside in the cold and rain to potty or walk but it’s up to you to teach them that bad weather won’t hurt them. They are short and close to the ground so rain doesn’t just fall on them from the top but it splashes them from the bottom. Be prepared to meet some resistance if you try walking them in the rain (including going out to go potty) and be prepared to shovel a path if there is snow in your back yard. That being said, I am a huge proponent of NOT letting them refuse to go out in inclement weather. If you start young and teach them that you don’t allow stubborn shenanigans on rainy walks, they will learn that it’s something that can be tolerated. A warm and waterproof jacket made to fit a Dachshund can help them to be comfortable going out when it’s wet or cold. 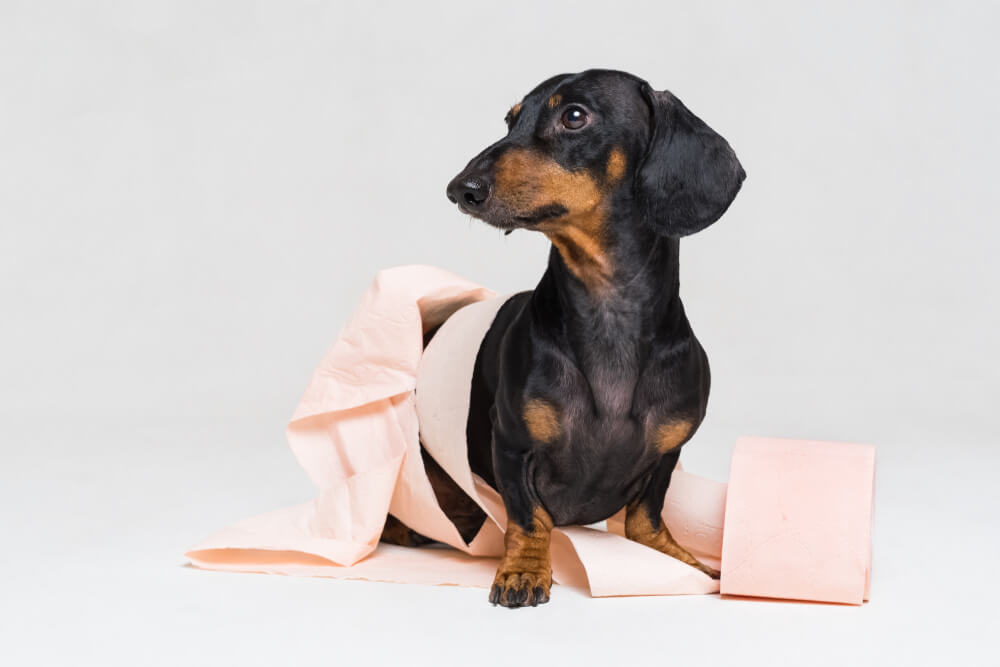 Dachshunds Are Hard to Potty Train

I didn’t consider my Dachshund Chester 90% potty trained until he was 7!

Honestly, though, a huge part of why it took so long is because I had to figure out that it was his separation anxiety that caused him to pee on the carpet when I left.

Potty training is not always a one-time deal.

Your Dachshund may need refreshers throughout their entire life!

This might be the #1 reason Dachshunds get surrendered to shelters.

I believe, and have heard the same from several Dachshund owners, that it’s not very hard to potty train a Dachshund if you are dedicated and consistent.

I was able to potty train my Dachshund puppy in about 6 weeks.

Now she rarely has accidents in the house and if she does it’s usually because I missed her signals that she needed to go out. 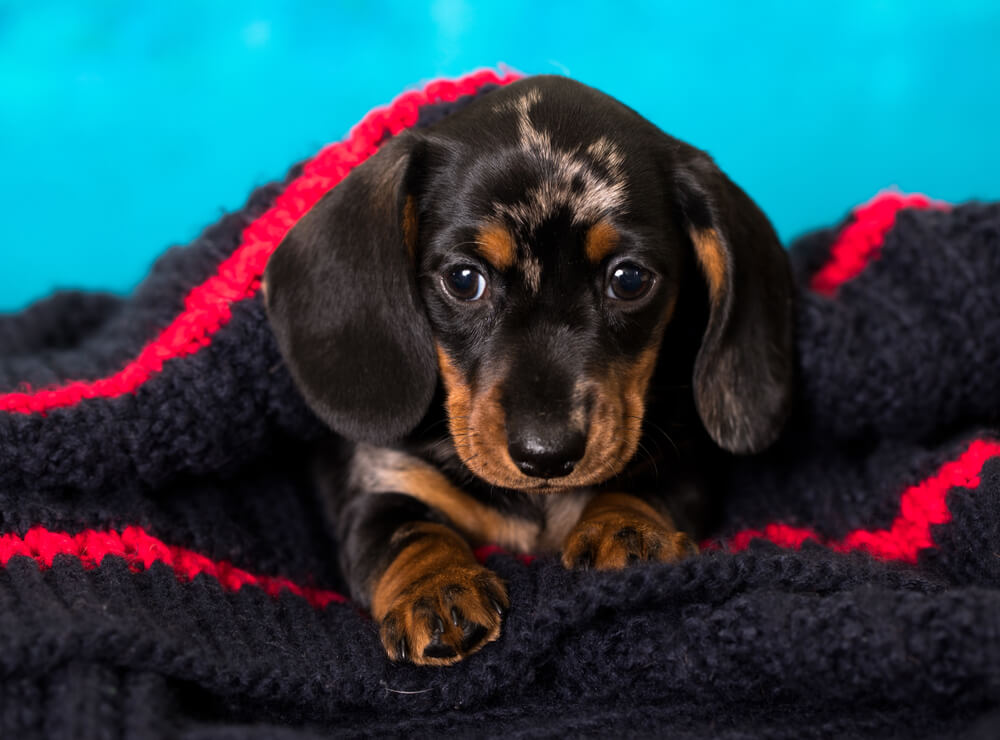 Dachshunds are scent hounds to be exact. They were bred to hunt, covering a lot of ground, sniffing out badgers, rabbits, and other small games. This means that they are controlled by 2 things: their nose and their belly! You can help fulfill this natural hunting drive by making them feel like they are “hunting” for food and treats. Great ways to do this are to join a nose work class or buy a snuffle mat like this one or this one for home. 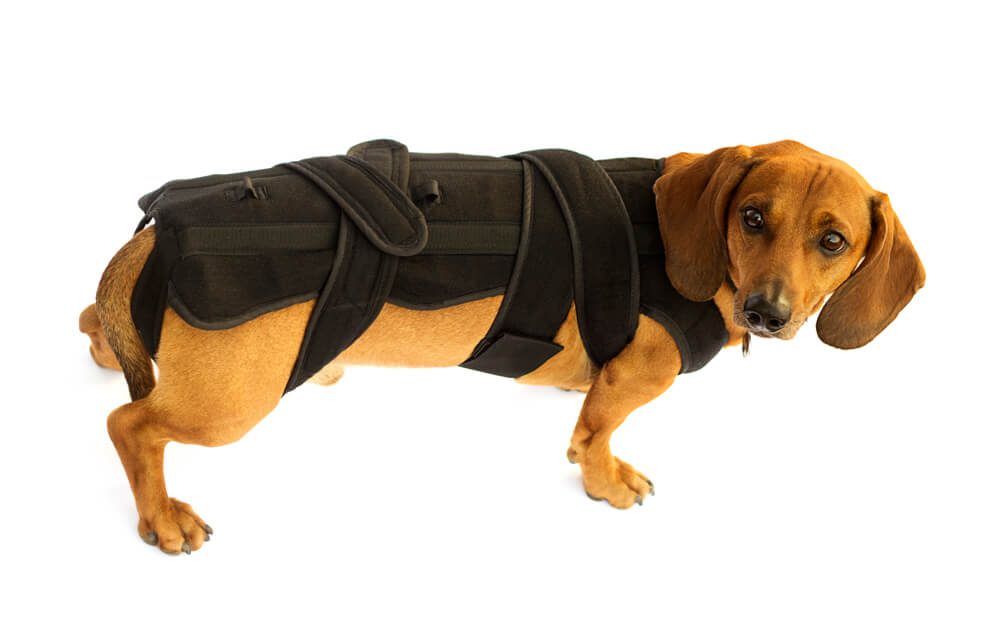 Dachshunds Are Prone To Back Injury

Dachshunds are genetically prone to a condition called Intervertebral Disc Disease (IVDD). IVDD is a hereditary disease and your dog will either have or not. If they have it, no matter how careful you are, they could develop a spinal injury in their neck or back. Owning a Dachshund is kind of like roulette in that regard because 1 in 4 Dachshunds are affected by some kind of spinal injury at some point in their lives. 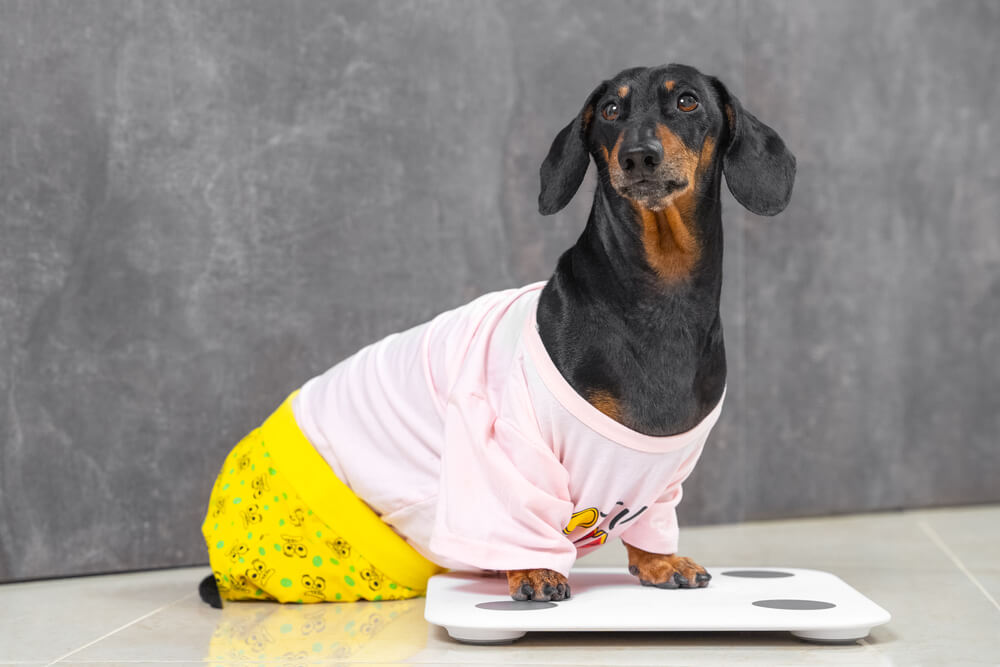 Dachshunds Are Prone to Obesity

The nickname “sausage dog” may be cute but your Dachshund should not actually look like one! A Dachshund will ALWAYS tell you they are starving. It’s up to you to have the willpower to say no when they’ve had enough treats and provide the proper quantity of food. Obesity is rampant in Dachshunds and can exacerbate IVDD. It can also bring on other serious medical conditions like diabetes. Dachshunds at a proper weight should have a tuck behind their ribcage (think greyhound) and you should be able to see their waist when looking from the top. 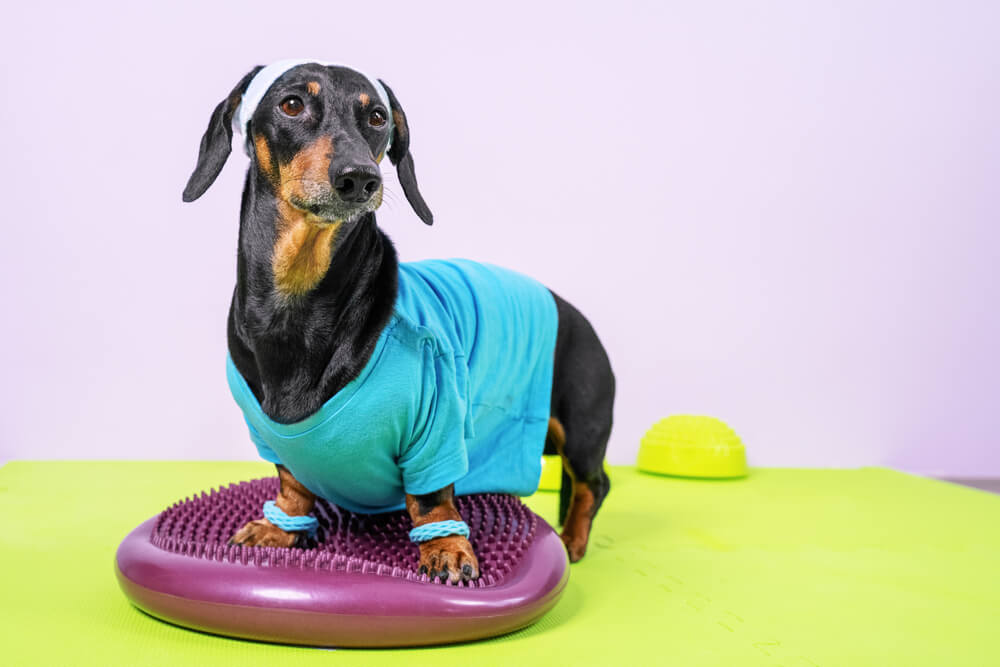 Dachshunds Are Energetic and Need Plenty of Exercises

Because of their small size and short legs, many people think that dachshunds don’t need much exercise or are not capable of it. But they are bred to be hunters, remember? They are bred to be active dogs. Sure, a Dachshund is happy to laze around the house if you let them but they are capable of more than you think when it comes to exercise. Most Dachshunds I know took to hiking 3 – 5 miles their first time out. I’ve hiked up to 10 miles a day, three days in a row, with Gretel. I know many Dachshunds who compete and excel in athletic events such as agility. Although not typical, Truman the Doxie ran a whole marathon (over 26 miles!). Besides needing exercise to stay physically healthy, it will keep them mentally happy. A well-exercised Doxie is less likely to bark incessantly and chew things in the house than they shouldn’t. If they have to be cooped up in the house for the day, spend some time playing fetch with them or tug with a toy. Summit loves this squeaky ball and would probably chase it endlessly if I let her. If you’re not sure your dog is getting enough, check out these ways your Dachshund may be telling you they need more exercise. 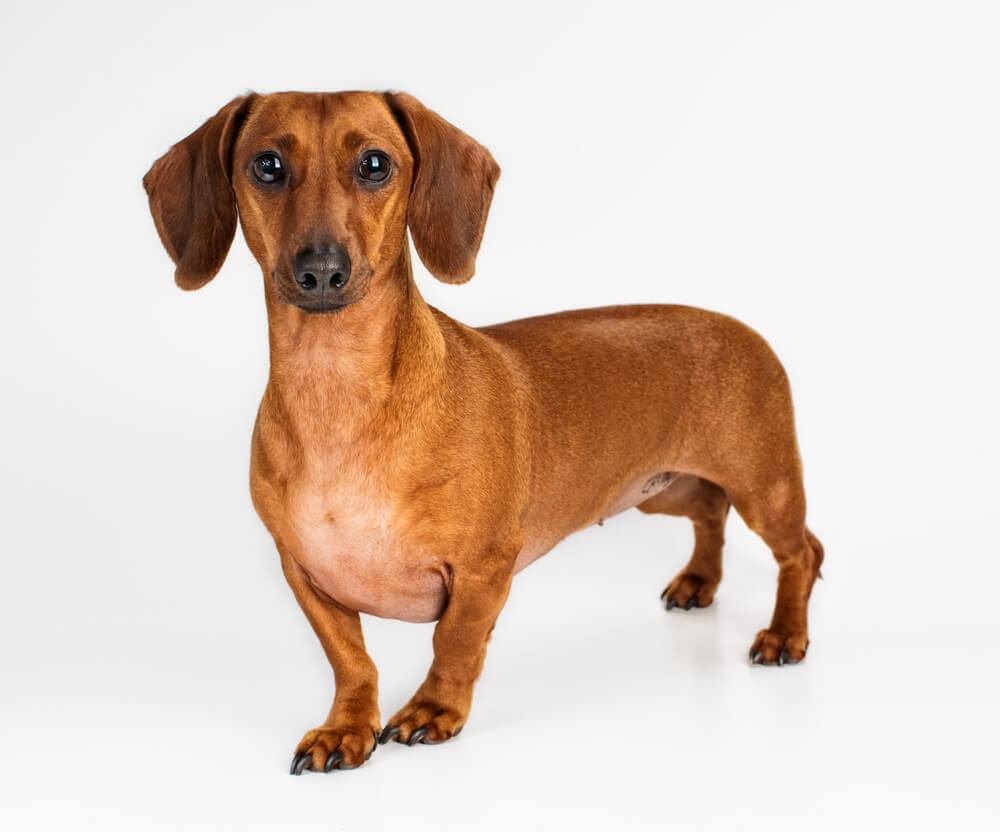 Dachshunds Have a High Prey Drive

Dachshunds were bred for hunting badgers, rabbits, and other rodents so killing anything that squeaks is part of their nature. That means that anything that is furry and runs fast, or resembles something like that, is seen as prey. While I have seen MANY Dachshunds learn to live peacefully with a kitty or other pet, they will almost ALWAYS see critters outside of the house as something to be chased, hunted, and eaten. Hold onto that leash when near small animals and know that random wildlife in your back yard may meet an early demise. It can be hard to find a stuffed squeaky toy that they won’t destroy in a few minutes.