Why Do Some Corgis Have Long Tails? 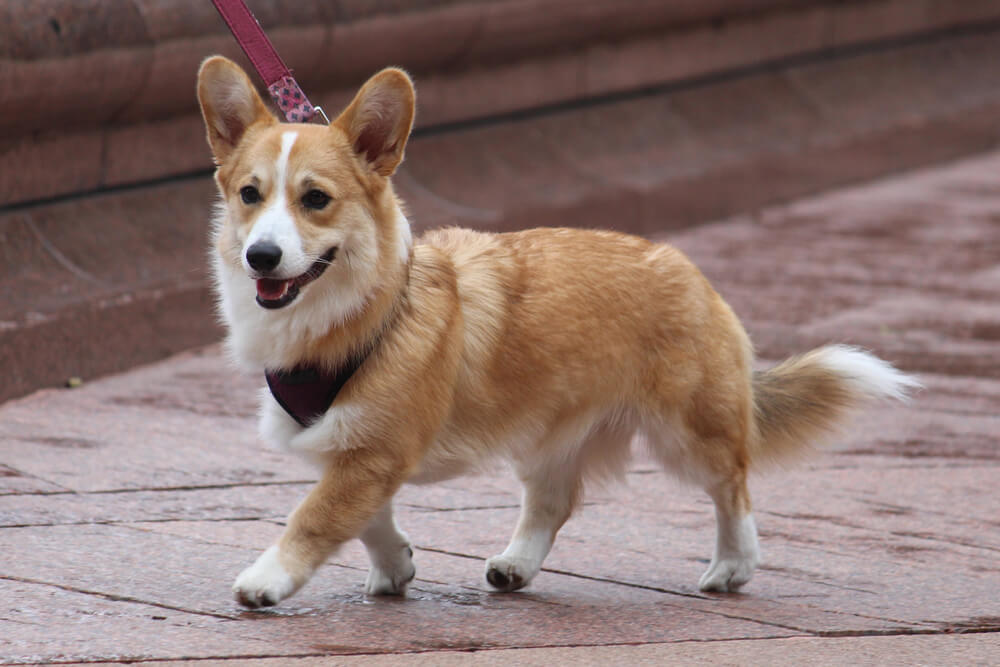 Introduction to Why Do Some Corgis Have Long Tails?

Corgis, as a rule, are their tails docked meaning the tails are amputated at an early age.

Historically, docked tails made it easier for the dogs to be herded, and a long tail could even get a Corgi caught in a fence or in low-hanging branches, at which point it might get injured or even killed.

But if the tails are docked at such a young age, how do some Corgis have long tails?

Corgi dogs come in two varieties: one with long, fluffy, low-set tails, and one with short, stubby tails that are usually raised up high.

The differences in appearance go beyond just the length of the tail. Long-tailed Corgis are often slightly taller than their short-tailed counterparts, and their bodies tend to be a bit longer and more slender.

Long-tailed Corgis have a longer body and face, shorter legs, and a longer tail than their short-tailed cousins.

The rear of their rib cage also tends to be less prominent, giving their bodies a smoother, rounder appearance.

If you are a fan of the Corgi breed, then you might have noticed that not all Corgis are the same. Some have longer tails than others, and some have shorter tails.

This begs the question: why are some Corgis born with long tails and others with short tails? Well, the answer lies in genetics, which is why breed standards differ from country to country.

In the United Kingdom, Corgis are not allowed to be bred if they look like they could have long tails, so as to prevent long-tail Corgis from being born.

In the United States, however, both short tail and long tail Corgis can be bred and shown. 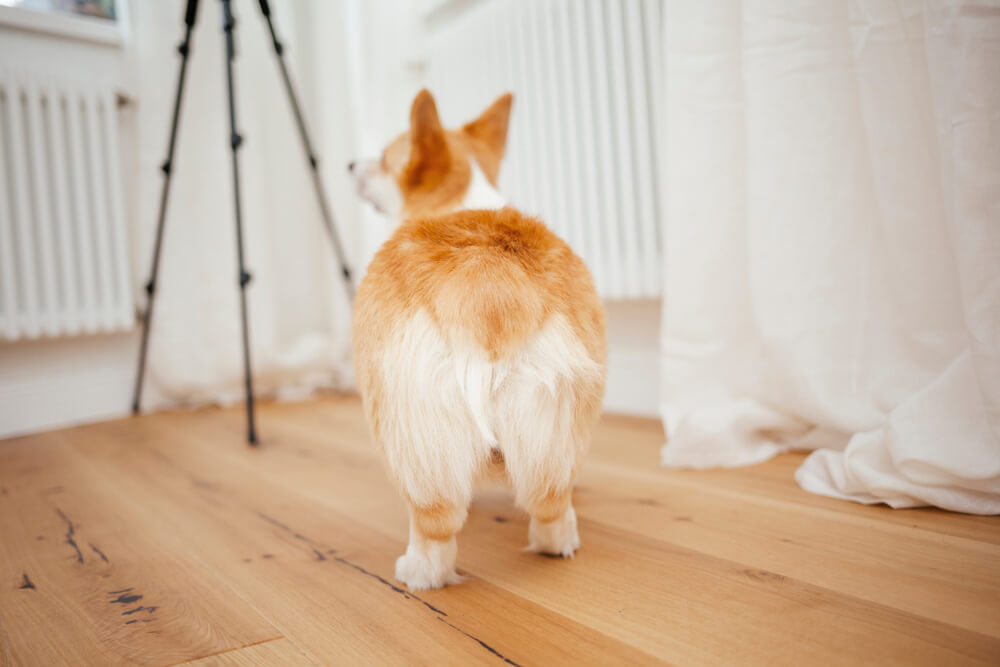 Can Corgis Be Born With Short Tails?

Naturally occurring bobtailed corgis do exist, but theyre not nearly as common as their full-tailed counterparts.

If a puppys natural bob-tail is not short enough to comply with AKC standards then the tail will need to be docked.

The gene that produces natural bobtails is an autosomal dominant gene.

Only one copy needs to be passed onto offspring to produce a bobtail puppy and therefore, only one parent needs to carry the gene.

However, if a puppy receives 2 copies of the gene (one from each parent) it is considered to be embryonic lethal.

This means that if an embryo receives two copies of the bobtail gene, it will be expelled from the uterus and will not produce a puppy.

In other words, we will never be able to completely eliminate the recessive long tail gene from the gene pool, and long tails will always exist in corgis. 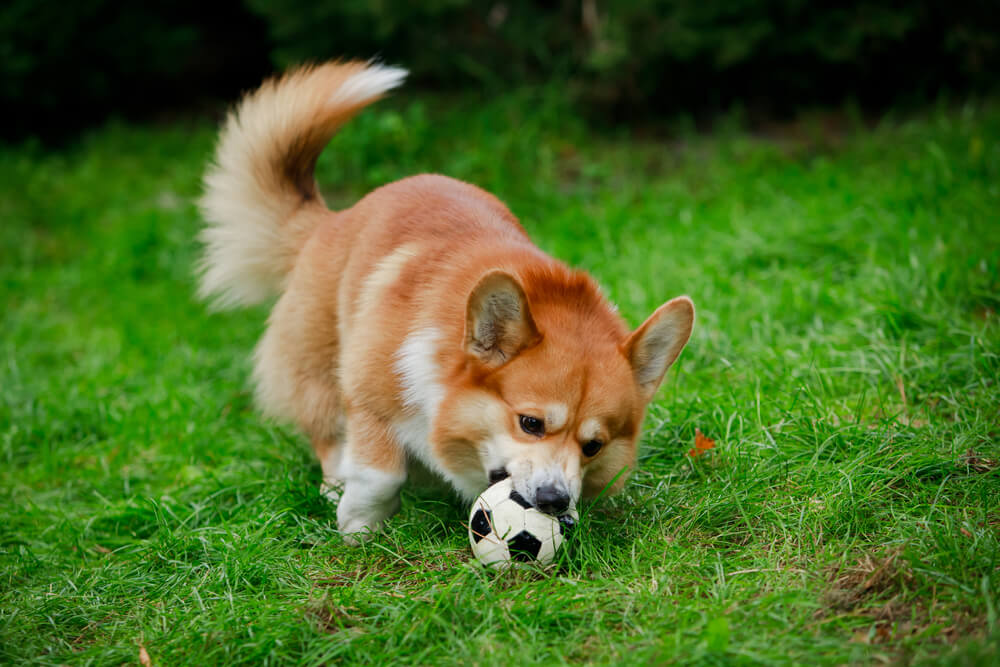 Are Corgis Supposed To Have Tails?

Yes, corgis are supposed to have tails most corgis are born with a tail.

As you may know, there are two types of corgis that are classified into their own breeds.

You have the Cardigan corgis and the Pembroke corgis.

Cardigan corgis are considered to be the older breed and many folks believe that Pembrokes were actually bred out of the cardigans.

Both breeds are supposed to have tails and are born with them, but only the Pembroke corgis get their tails whacked at about 3 days old.

Its just that the breed standards for Pembrokes require having a docked or no tail at all.

Only the Cardigan Welsh Corgis have tails.

There are Pembrokes that exist with tails as they were never docked as a puppy.

Corgi tails are typically present at birth unless theyre born without out.

The only reason you see some Corgis with it and some without is because of the species.

It may surprise you, but most Pembroke Welsh Corgis are born with full-length tails like the one pictured above.

Its not uncommon for people to assume that corgis are born with short, stubby tails because most people have only seen tail-less Pembroke Welsh Corgis.

Tail-less corgis are corgis that have had their tails docked.

Pembroke Welsh Corgis will have their tails docked when they are born in order to comply with the breed standards designated by their parent club. 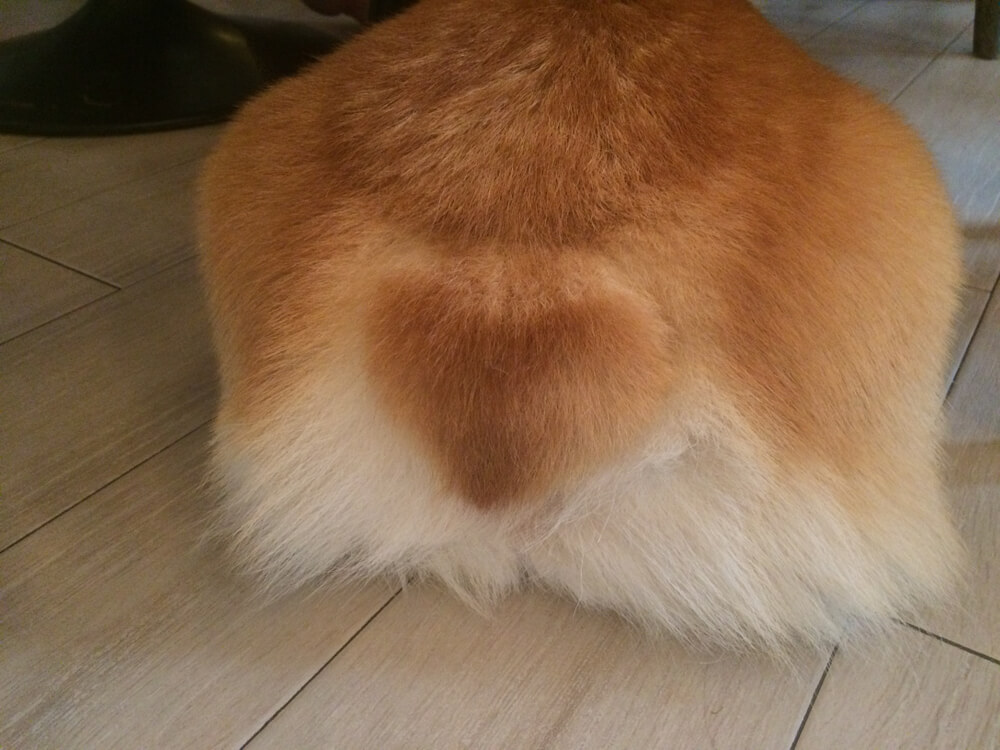 The Origin Of Tail Docking

England implemented a tax on companion dogs in the 17th century.

In order to show the English government that their dogs were working dogs and not companion dogs, owners had to ensure their dogs had docked or bobbed tails.

Because corgis were a popular herding breed in England at the time, they were also subject to these requirements.

The companion dog tax was eventually repealed in 1796, but by then it was too late.

Many dog breeds, such as the Pembroke Welsh Corgi, had already developed a new breed standard of appearance.

Its likely that this was where the AKCs breed standard for the Pembroke Welsh Corgi originated. 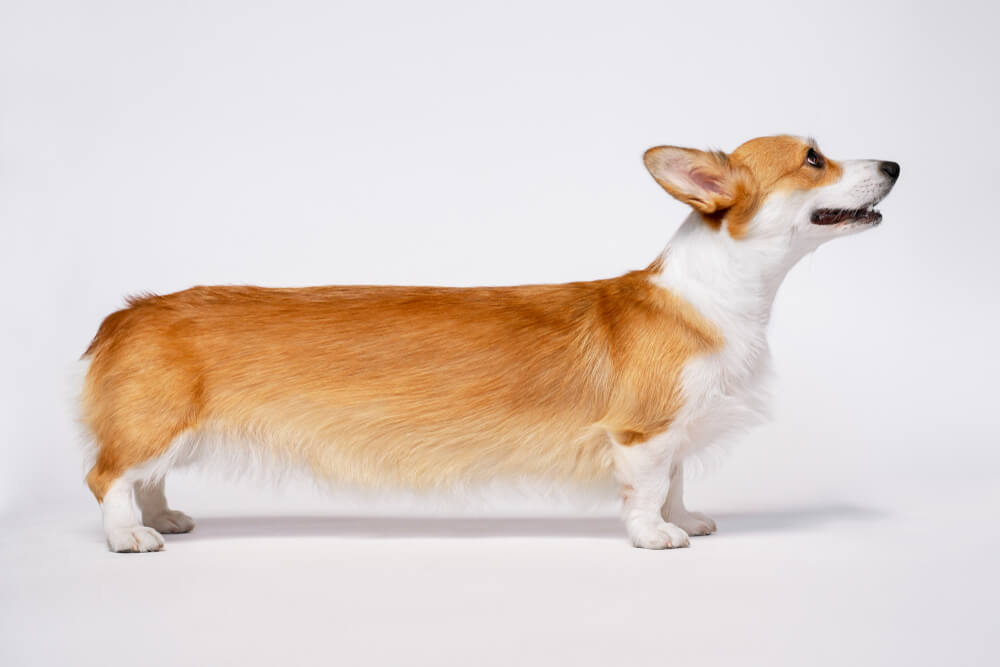 Why Don’t Corgis Have Tails?

Only the Pembroke welsh corgis tail has to be cut there are some reasons behind the docking of their tails, they include the natural bobtailed, the breed standards, and having not tails for herding.

Like I mentioned earlier, the AKC standard requires that a Pembroke corgi should have no tail, and if naturally bobtailed, it should not be longer than 2 inches, or in short, it should not create an indentation.

So, if you buy a Pembroke registered with the AKC, expect to have a docked tail.

Their tails are cut when they are small puppies of about three days old this act has been going on for so long that it has become a tradition.

The procedure dates back to ancient Roman times they believed that docking their tails would reduce the chances of the dog contracting rabies.

Another reason for docking the dogs tail is that the dogs were cattle herders.

No Tails For Herding

Herding is the main reason why the Pembroke corgi has its tail docked, which I think is unreasonable.

The dogs were indeed for herding, but times have changed, and no one still uses the corgis for herding.

Since their breeding was for herding, their tails had no use. Instead, they were liabilities.

They assumed that since corgis are short, a cow would stomp on their tails during herding.

It is still unreasonable considering the dogs tail curls upwards. Some breeders are against the docking of their tails, and they have even tried to stop the practice of docking corgis tails.

The other why corgis have no tails is that they are born without one.

Although most corgis have no tails, not all are docked.

Some are born without tails.

They are the naturally bobtailed corgis some will have shorter tails than usual, and they also fall under this category.

You need just one copy of the mutated T-box gene to get a bobtail, however, the length of the tail will vary depending on some other genetic factors.

The practice of docking a corgis tail should take place when the dog is still very small.

It is between the second day and the seventh day, however, the time to cut the dogs tail will vary depending on the breeder.

Some will do it on the third day while others will do it sooner and others later.

Something else that changes are the cut length.

The AKC will not have it longer than 2 inches. It is the maximum length for them.

There have been arguments over and over about whether tail docking hurt, and I think this argument will go on for a long time.

Advocates say that docking at this early stage should not be painful because the dogs nervous system is not fully developed.

On the other hand, the opposers say that just like a fully grown dog, the nervous system, whether basic or fully developed, is enough to make docking painful.

It would be very alarming if they felt pain, but there is no concrete evidence of this.

However, during the process, the puppies will produce shrieks, which means they feel something.

But there are also cases where they cut their tails as they sleep and wont even wake up.

There have also been cases where the puppy will cry days afterward. Most pet owners are against docking their tails, and they even call the act barbaric.

For this reason, the ritual I banned in some countries. 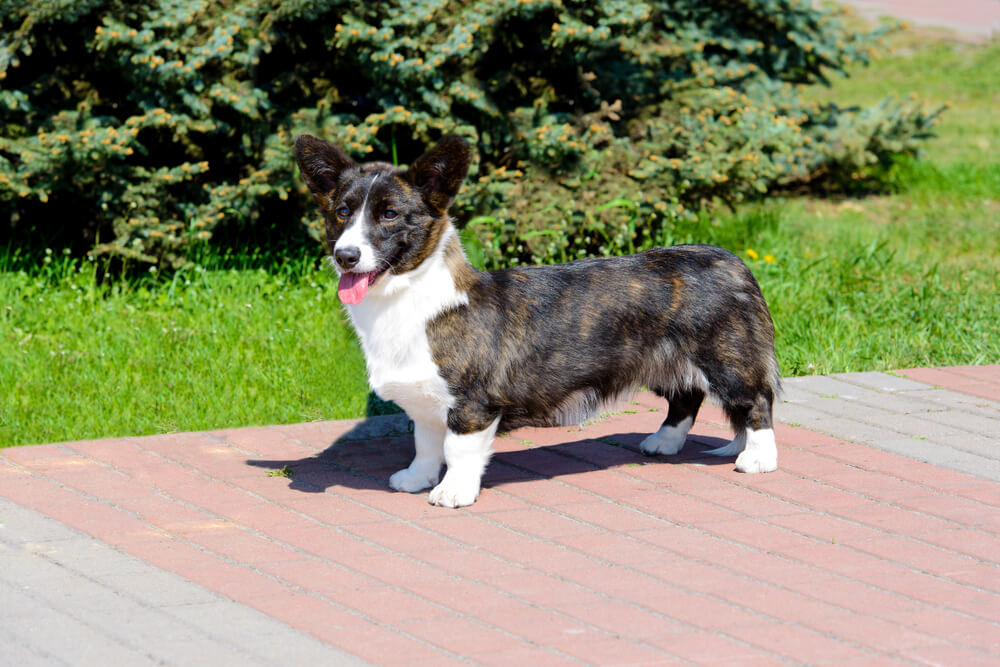 How Do You Cut A Corgi’s Tail?

The process occurs in the early stages of the dogs life.

Mostly it takes place three days after the dog is born.

There are two ways in which this process is done. One is by using a rubber band.

This rubber band is twisted tightly around the puppys tail to cut blood circulation to the tail.

After some time, the tail rips off.

The second and most common way is to use a pair of scissors.

It is a process I would not like to witness, but all in all, the scissors are used to cut through the tendons, muscles, and nerves.

This process seems painful, considering that they do not use painkillers or anesthesia. 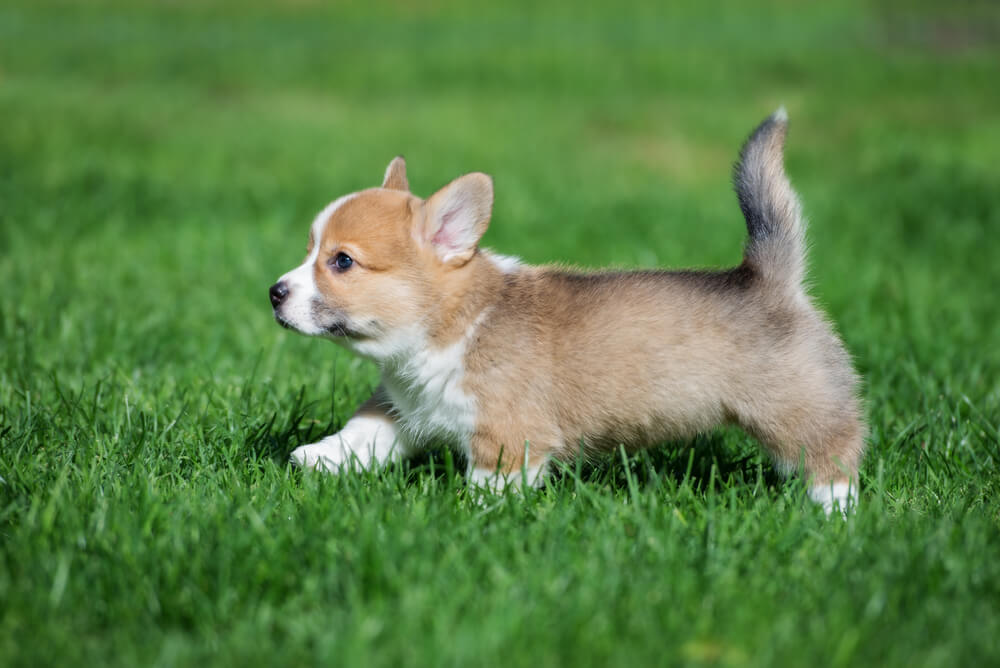 To Dock Or Not

Now that we know why and how they cut the corgis tails, should their tails be docked?

If you are looking to buy a corgi and want the procedure skipped, you should purchase a dog before birth and request them to skip the process.

Some breeders will decline if they are reputable. The less prominent may agree, but you should consider the reputable breeder for its long-term health of the dog.

If they refuse, you should probably check in countries where the process is banned.

I think the process is ridiculous, considering that corgis are not used for herding anymore.
Those are my thoughts.

Now that you know about the docking of their tails, it is up to you to decide what you want.

I like their fluffy tail, so I will go with keeping it no matter what.